November 2, 2017
BY MATT WEBER ON NOVEMBER 2, 2017 1:06 PM
Vanessa Grigoriadis, author of “Blurred Lines: Rethinking Sex, Power, and Consent on Campus,” looks at what is really happening behind closed doors on America’s college campuses. 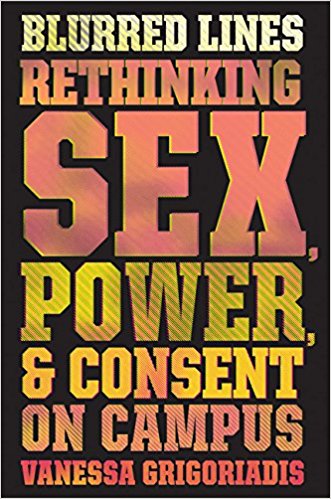 Author Vanessa Grigoriadis knew that if she really wanted a window into what was happening on college campuses in regard to relationships, sex, and consent, she was going to have to go straight to the people to whom it matters the most — the students. It couldn’t be through formal interviews, though. She’d have to talk to kids where they were most at ease: in food courts and dorm rooms, at frat parties.

“I really talked to kids on their own terms and tried to hear their voices,” she says, describing the visits she made to many college campuses while she was researching her book, Blurred Lines: Rethinking Sex, Power, and Consent on Campus.

According to Grigoriadis, 73 percent of all sexual assaults on campus occur during what she calls “The Red Zone,” the first six weeks of the first semester. And, most often, those involved are freshman and sophmores who are getting used to new freedoms: drinking and partying more than they are used to, and with people whom they do not know well. To start to curb this, it is important that parents and educators take time to listen to the kids themselves.

“Let’s really try to understand where the kids are coming from,” says Grigoriadis. “The kids themselves are the drivers of change here. They are taking this issue incredibly seriously. It’s a real generational shift in the way that they think about sexual consent.”

In this edition of the Harvard EdCast, Grigoriadis shares what she learned from her time on college campuses, and offers suggestions about how we can prepare our children to have healthy relationships once they have gone away to school.

About the Harvard EdCast

The Harvard EdCast is a weekly series of podcasts, available on the Harvard University iTunes U page, that features a 15-20 minute conversation with thought leaders in the field of education from across the country and around the world. Hosted by Matt Weber and co-produced by Jill Anderson, the Harvard EdCast is a space for educational discourse and openness, focusing on the myriad issues and current events related to the field.

I am a Shift Manager for Taco Bell in Tulsa, OK. My job is great and my coworkers are awesome. View all posts by safespacesweb

Safe Spaces Web resources share an extensive knowledge based expertise that will continue to help you strengthen your core beliefs and attitudes while working to advance your crosswalk intersection education and public transportation community.

A commitment to and focus on doing whatever it takes to make sure that every citizen successful.

Starts with relationships, mentor-mentee work partners, building trust and growing professionally in ways we could not do alone.

Safe Spaces Web demands responsibility.  And holds accountable participants whose goal is to move from being and average leader to a great one.  This goal requires commitment.  Because PACE TULSA is a life-long commitment to civic stewardship, we want to help AGS partners bridge

Every pedestrian must commit to being safe. They bring their own educational experiences and understandings, from which they continuously learn and grow. This same belief applies to all pedestrians.

By asking questions and having conversations about crosswalk intersection safety. Learning becomes challenging and interesting.  AGS participants learn meta-cognition: the ability to self-assess, to imagine how a driver safety can be more effective next time, as well as, exploring how to meet the public safety needs of every citizen.

At PACE TULSA, our experience shows that

A mindset of curiosity – planning a destination; finding the location; mapping it; analyzing the impact of the travelling to that part of your city; analyzing the conditions for organized travel; working on speed and distance of travel; reflecting and revising the road conditions –all of these attitudes; opinions and conversations results in listener awareness and stimulates continuous citizen participation.  Moreover, this One Vision philosophy builds excitement and interest in more than just public transportation safety in your community.